The Chinese New Year public holidays saw us packing again...this time to Singapore. We took the bus to KL, spent a night at a hotel as we did not want to bother my SIL (who also just came back from a family event).
The bus ride was smooth but I like the hotel we stayed that night, no frills - you pay extra if you need to use aircond, tv etc. As we only need a short sleep before our next bus ride early the next morning, we only pay RM81 for the basic....seen here the design on the wall.....Tune Hotel 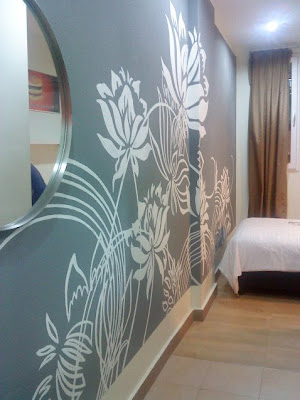 Our four and a half hour (supposedly 5 hrs) bus ride to S'pore the next day was a smooth one, no traffic jam & no queuing even at the immigration, so we thought we 'might be the only creatures' there- happy happy.
Arriving hotel at noon (we booked the hotel where our bus stops, located @ Dunearn Rd), we registered Sentosa Island Sunset Tour due 3pm that day @ S$60/pax. Our judgement of being the only ones in S'pore proved otherwise. There were many tour buses, lots & lots of people! There's no way for us to turn back, so we took the cable car to Sentosa, seeing more people there. The underwater world was suppose to be very nice, but too crowded, you can 't really enjoy. Cannot blame the crowd as it was holiday kannnn so follow the flow lah. Then i heard the tourist guide mentioning 'song of the sea'(we were actually 'blurred' by the noise & crowd). I thought we were only going to hear the waves but the show proved to be the best for that day. The set was located at the shoreline,the audience sat on benches at the beach. The show was brilliantly choreographed, all I can say was.....AMAZING! That was the last stop for the package tour before we returned to the hotel late evening. And we decided:- no more package tour! not because it's not good but its just too crowded. 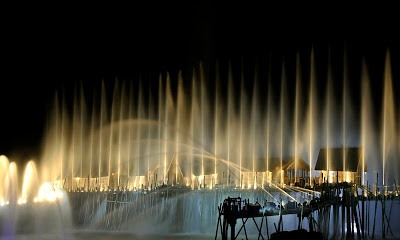 The next morning, we took the shuttle to Orchard Road. Many people but manageable. We spent time having al-fresco breakfast(McD) at the corner of Scott Rd/Claymore Hill, sipping coffee munching muffin....tengoklah apa girl tu buat kat my Cappucino , she definitely made my day. 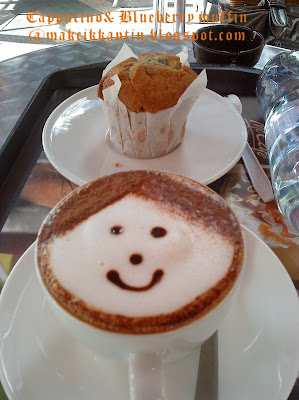 We spent that day walking and walking and walking...tak ada tujuan but just window shopping, enjoying every single minute watching people passing by & items on sale in the shops; Lucky plaza, Takashimaya, Paragon,Tangs, wheelock ....... Letih jalan we stop to rest. Tengahari after lunch, we went to Mustaffa Centre (or little India they call it) to jamu mata. You can find almost every item there; phones, clothes, audio, video, sports stuffs, household items, gold (glitter glitter) and list go on.... 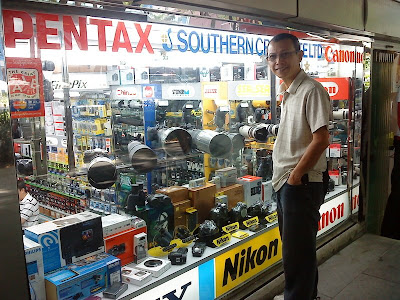 That night after dinner(vegetarian) at a vietnamese restaurant, we headed to the Esplanade. Hubby dok sibuk dengan camera dia lah click sana clack sini...while I enjoyed the surroundings. This trip was actually a compensation; during our last trip in 2007, I fell sick the moment we arrived S'pore & only managed to see the 4 walls of the hotel room the entire duration of the trip. 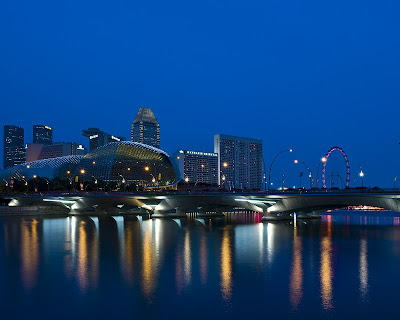 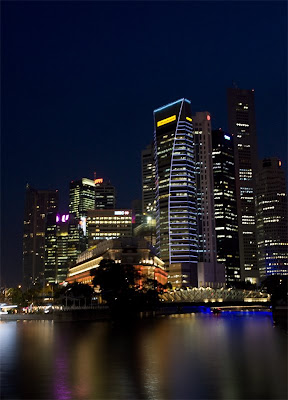 We resume the next day; again @ Scott Rd/Orchard Rd, we like it there...no purchase, just enjoy the walk. As usual, I like to note the names of the road;- Buyong Rd, Bt Timah Rd, Serangon Rd, Bras Basah Rd,Victoria St, Kerbau Rd, Lembu Rd, Kg Kapor Rd, Tembeling Rd, Lor Sireh Pinang ( i assume Lor=lorong), Langsat Rd, Haji Lane, Sultan Gate, Kg Glam, Tlk Blangah Rd...the list goes on....
We also visited Golden Mile Complex, also known as little Thailand (for lunch actually). This complex houses the bus terminal to Thailand and you can find most items from Thailand here.
There are many more places we missed, Jurong Bird Park, Zoo, Arab St, Geylang Serai-just to name a few but we definitely enjoyed our times being together there. After 3 nights, we said goodbye to S'pore and headed home...... 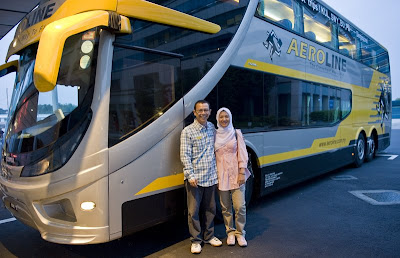 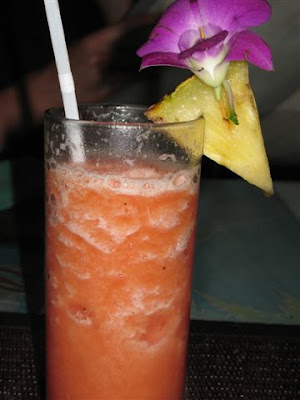 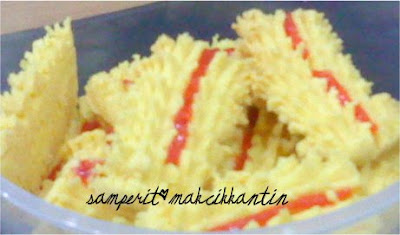 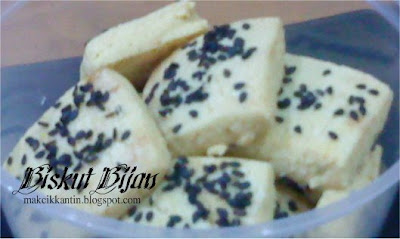 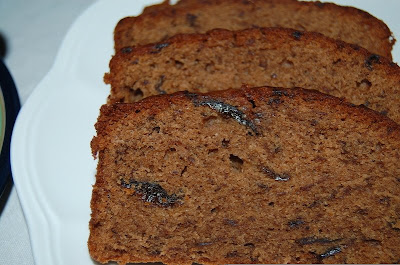 I was in KL as da man-of-the-house ada meeting kat sana. We stayed in my sis-n-law's @ TTDI.
Followed hubby to his two meetings on monday (kite dok luar le). After the first meeting, we went to have lunch @ Amcorp Mall. Lepas makan jamu lah mata kejap, ronda ronda & got stuck at a store selling imported magazines @ RM9.90. Hubby bought Photo mag while I settled on a Quilt mag.
Soon after his 2nd meeting, we went to midvalley & while enjoying cinnamon rolls @ Saint Cinnamon, teringat pulak nak call Pit, my sekolah sains buddy. Thanks Pit for your time - we both have gone thru a scary,testing time ya & alhamdulillah we made it. 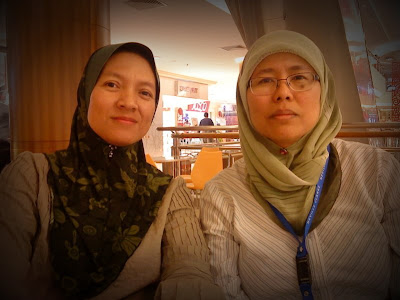 The year 2009 has entered its 15th day. One thing for sure, i don't have to send my children to school. Adil, my second & youngest finished his SPM last year & now working part time at one of the malls here. He passed his driving test but has not passed my test, so no driving alone for him yet and as such, he is chauffeur-driven to & from work.
I also opened a new bank account for him. Alah bukan banyak pun, cuma minimum amount to entitle him to an ATM card....waaaa happynya dia. So friends out there, I've come to realize that there are so many different ways to make someone happy.
Lagi about this 'buntal' son of mine, tadi pagi sibuk suruh hantar ke gym, nak register gym pulak dahhhh! Ok, let him try for a month & see how he juggles his time working & working out! To motivate him, we only sponsored half the amount, the other half he forked himself(his allowance). He aims to 'remove' his jelly belly so let us see if he succeeds in this one...
He loves to cook & aspire to be a chef one day
Adil, left. Abang dia on right, while mak/bapak kat belakang tu...

The elder brother, Alif on the other hand is much slimmer, dok cari ubat pulak nak bagi gemuk sikit. In his final year at uni, he is into photography & is very happy that he 'inherited' his father's Nikon-D300 recently when the father upgraded his. With lots of projects/assignment to be submitted, he is seldom home (home-uni is only 10 minutes drive) & (seems that) he loves to sleep under the table in the studio!
With them both grown up(dah tak duduk bawah ketiak), I always treasure our moments together. We (hubby & i) support their choice of career & we pray that they would lead a wonderful life in the future without forgetting their roots/religion.
Mak pun adalah lebih masa nak ikut bapak outstation, itu pun kalu schedule dia tak ketat sangat.
Apa2 pun Adil kena cekap drive dulu.
As for other things, my morning coffee with friends of the same kind (he..he semua home minister!) go on as usual.

Posted by makcikkantin at 4:18 PM No comments: 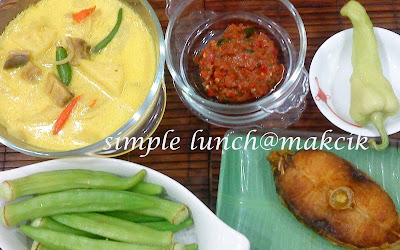 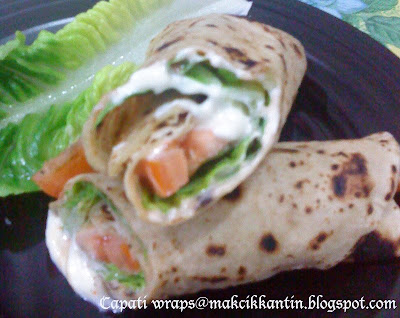 Posted by makcikkantin at 11:46 AM No comments: